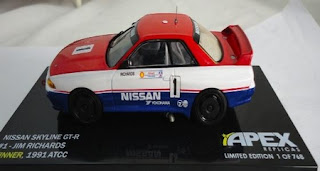 Due next Month IXO models have announced four new 1:43 scale replica Nissan Skyline GTR R32 models as raced in the Australian Touring Car Championship. All four models will be limited editions and we will have the following models in stock:

Please keep checking our store below for details, all above models are due for release in February 2012

www.hartmotorsport.co.uk
Posted by Hart Motorsport at 09:19