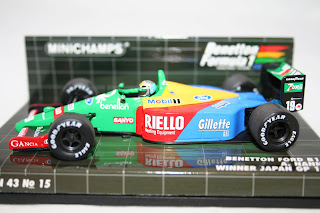 This week Hart Motorsport have received five new Minichamps F1 cars plus a two brand new releases by Spark. Now in stock are two Benetton B189 F1 cars from the 1989 season, including the version as driven by Alesandro Nannini to victory in the famous 1989 Japanese GP. Also new this week are two more Brabham BT49C F1 cars from the 1981 season. The cars driven by Rebaque and Winklehock are limited to just 700 pieces World Wide so these are sure to be collectable in the future. The final new release by Minichamps is Lewis Hamilton's 2010 McLaren F1 Showcar. New from Spark this week is a 1:43 scale Renault RE50 F1 car as driven by Patrick Tambay to 2nd place in the 1984 French Grand Prix and a Lotus 76 as driven by Jacky Ickx in 1974.
All the above models plus 100's more are now available in store below.

www.hartmotorsport.co.uk
Posted by Hart Motorsport at 07:54