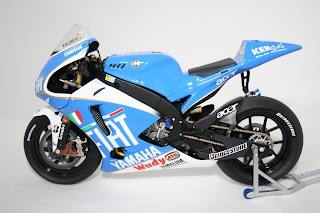 Hart Motorsport are please to announce that the stunning Yamaha YZR M1 Minichamps model as raced by Valentino Rossi at Barcelona in 2008 has finally arrived. Limited to only 5,999 pieces World Wide this model sold out at suppliers long before its release. The model features the one off paint work that was used in the colours of the Italian Football kit. We are sure that in years to come this model will be as rare as the Valencia Paddock bike that sold out on release at the end of last year. Be sure to visit our shop below soon to avoid missing out.
Later this Month we are also expecting Rossi's 2009 Yamaha M1 as well as Nicky Hayden's 2009 Ducati Desmo. Be sure to come back soon for further details.
www.hartmotorsport.co.uk
Posted by Hart Motorsport at 15:04