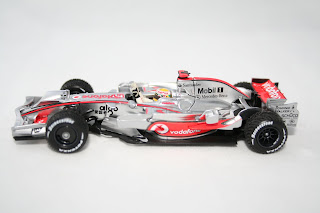 Hart Motorsport are please to announce the arrival of the 2008 McLaren F1 car that celebrates Lewis Hamilton clinching the 2008 F1 Drivers World Championship. Built by Minichamps this is the model from the Brazilian Grand Prix in which Lewis won the title on the very last corner. The model features rain tyres and has Lewis holding his hands in the air above the cockpit. The model come boxed in a Minichamps World Champions Collection box listing all the details on the car, points Hamilton scored in the season and lists all the Victories from that year. A simply stunning looking model.
For details on this car plus 100's more Minichamps models please visit our shop below.
http://www.hartmotorsport.co.uk/
Posted by Hart Motorsport at 07:40